Rebecca is a primary teacher with a love for the performing arts and has been performing from a young age. She performed in her first musical, The Wizard of Oz at the age of seven.

Since then, Rebecca has performed in a number of musicals including Peter Pan, The Little Mermaid, Wicked, We Will Rock You and played the role of Alice in Alice in Wonderland with Centrestage Limerick. She then went on to perform with the Mary Immaculate Dramatic Arts Society during her time in Mary I.

Rebecca performed in her first chamber musical, Songs for a New World, as well as musicals Godspell and Seussical The Musical. Rebecca has completed grade 8 with The Irish Board of Speech and Drama, as well as grade 8 Music Theatre (singing & performance) exams with the London College of Music.

Rebecca is delighted to join the Musica Fusion team and is truly looking forward to sharing her passion for the performing arts with the wonderfully talented students! Let’s break a leg! 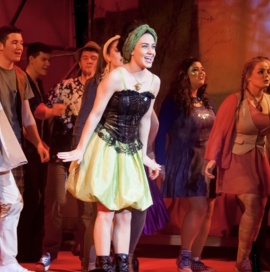