Aisling Lineen began studying music at the age of 3, learning piano. In the following years, she learned flute, euphonium, baroque recorder and violin, and decided to continue with flute, euphonium and piano. On moving to Mitchelstown in 2004 she joined the Mitchelstown brass band and pursued studies on the trombone. Following that, she was very active in the musical community playing in various ensembles such as the Fermoy Concert Band, the Midleton Concert Band, the County Cork VEC Youth Orchestra and the Irish Youth Wind Ensemble.

Aisling also regularly plays with various other ensembles including the Cobh Concert Band, The Speakeasy Jazz Band in Fermoy and the Mitchelstown Brass Band, and is the deputy conductor. As well as playing in various ensembles, Aisling also regularly plays in the pit orchestra with various Musical Societies.
Aisling has been a teacher with Musica Fusion since its inception, teaching flute, trombone, piano and trumpet. She is the conductor of the Senior Orchestra is the school, and often arranges music for them. 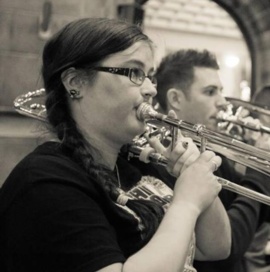