Hailing originally from Cobh, Abby has played the violin and piano from a very young age. She reached grade 8 in both instruments during her school years, and went on to attain an Honours BMus Degree from the Cork School of Music in 2016. She taught the violin, traditional fiddle and piano throughout her college years and is now a full-time music teacher.

Abby has played with many orchestras and traditional music groups, and is currently a member of the Cork Concert Orchestra. After completing her degree, she spent a year playing and singing professionally in Disneyworld, Orlando with the traditional band Swinging on the Gate and has also toured extensively with her Duo The Rolling Wave, who recently celebrated the release of their self-titled album.  She plays locally in Cork and Limerick on a weekly basis and is currently studying for a Diploma in Instrumental Teaching from Trinity College London. 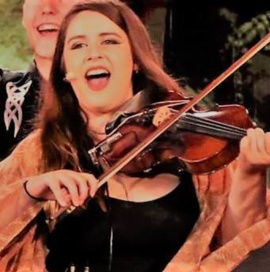